Menu
Main menu
Skip to image rotation. Please use up and down arrow keys to navigate between images.
Skip to primary content
Skip to secondary content

you may book a room... but you receive an experience to remember

Lodging at the Sheridan House Inn in Williams, Arizona is the perfect jumping off point to experience all that northern Arizona has to offer. We are right in the middle of historical, cultural, natural and world-renowned places visitors come from all over the world to see. From the Grand Canyon’s awe-inspiring vistas, the majestic red rocks of Sedona, the diverse landscapes in Kaibab National Forest, the vintage feel of Route 66 to an up-close-and-personal visit with black bears, your time at the Sheridan House Inn is sure to be as relaxing or as action-packed as you want to make it. The area is a photographer’s paradise; in fact, all the photos you see above were taken by Mark and Debbie, by our guests who have sent them to us, or a couple by the Unique Angles Photography who recently photographed our rooms. None of them came off the internet – so, you, too, can get treasured photos of this most unique area of the United States.

Below you’ll find a small sampling of some of the things to do in Williams or on day trips from the inn. There are a myriad of tour operators and impressive sights to see, probably way more than you can do on one or even two trips here. And they are all worth your time, depending on the season. Let us help you plan your itinerary and pick how you will see some of these incredible places. We’ve put together a PDF document to help you fully explore all there is to do while on a trip here, along with many links to websites for further information. We’d love to send it to you, and we’ll even book tours and answer any questions you have, for we want you to fall in love with this area just like we did.  Send us an email to reservations@sheridanhouseinn.com and we will email you the document to help with your vacation planning. 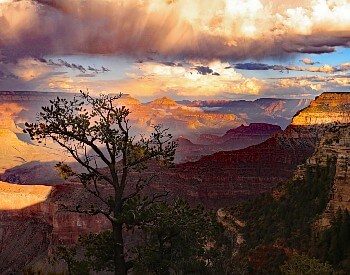 Please know that hiking into the canyon is always risky – and requires conditioning, training and much advance preparation and planning. But, there is much of the canyon to see right from the rim, and is accessible to everyone. There are miles of moderate strolls along the rim, beautiful sunrises and sunsets, along with fantastic museums and exhibits. Kolb Studio, built by the Kolb brothers, literally hangs off the rim and offers Canyon-inspired art exhibits. Mather Point, an easy five-minute walk from your car, offers spectacular views. We have a wonderful, away-from-the-crowds, secluded and romantic point we send our guests to – while it requires a 1-mile level walk through the forest, it is worth it, and the sunset there can’t be beat anywhere.  We will give you all the information when you check-in if you are interested.

There are a multitude of ways to see and to get to the Grand Canyon – you can drive and explore on your own, take the historic train from Williams go on a helicopter ride, rent bikes, ride the mules along the rim or to the bottom, or take an all-day tour with one of the many tour operators. One of our favorites is Canyon Dave for an all-day comprehensive tour that even picks you up and brings you back to The Sheridan House Inn. Check out the Grand Canyon National Park Service website for more information.

May you never ever forget the moment you first saw the earth give way to a canyon so deep you often cannot see the bottom. May you treasure that moment of awe for the rest of your life. 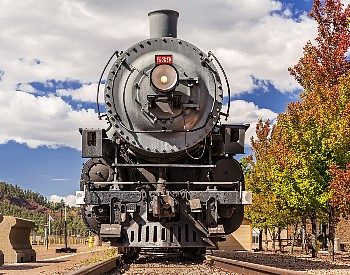 Grand Canyon Railway made its first journey to the South Rim in 1901 – it was literally the only way people got to the Grand Canyon except by a 12-hour stagecoach ride. We are so glad it was brought back to life a number of years ago, as today it offers a relaxing scenic trip to Grand Canyon. The train travels to Grand Canyon National Park every day from the Williams depot (five minutes from the Sheridan House Inn) along the same rail line established at the turn of the century. It takes 2.25 hours each way, but is relaxing and is filled with history, along with entertainment and refreshments, depending on your class of car.

We recommend taking one of the cars without children if you are going in the “kid’ season. You’ll be able to pick a different class for both ways, if you desire. Go online and select your carefully restored vintage classes of service. Journey to Grand Canyon National Park aboard Grand Canyon Railway and take a trip not only to America’s most recognized spectacle, but a trip back in time.

Ride all the way to the Grand Canyon behind Engine #4960, a vintage steam engine now powered by vegetable oil. Even if you don’t go on the train, we love steam engine days here at the inn – the sounds are amazing!

Interested in a trip by rail to the Grand Canyon? We can sort out the details for you. You can purchase your tickets for the Grand Canyon Railway through us. It is one less detail for you to worry about! 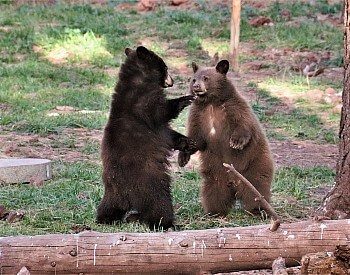 Just minutes from Sheridan House Inn, Bearizona is the best way to get up close and personal with animals most people only see on television or in the movies. Experience animal wildlife the way it was meant to be, in a natural environment, all from the comfort and safety of your own vehicle in the drive-thru part of the park.  Last year Bearizona was named the #3 wildlife park in the country by USA Today.

Don’t be thinking that it’s just for families, as we’ve found it is one of our guests’ favorite activities, and the setting in the forest makes it even better.  While in the drive-thru section you’ll see bears, big horn sheep, bison, wolves, elk and more. In the walk-through section are bear cubs, javelinas, fox, raccoon, and many more varieties of western wildlife. Don’t miss the Bird of Prey show – and make sure to sit in the middle!  Look at our pictures in the gallery. Find out more at www.bearizona.com.

Grand Canyon From the Air! 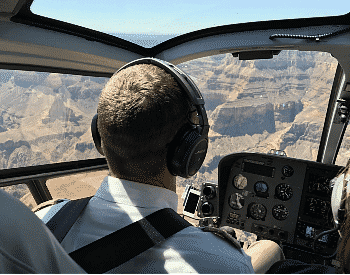 Looking for a unique vantage point to take in the Canyon? How about from the air! Since 1965 Papillon Helicopters has been the world’s oldest and largest sightseeing company flying an estimated 600,000 passengers a year on its daily tours to the Grand Canyon.

This will be the trip of a lifetime and a splurge you will always remember when you see the earth drop away from you in a moment of sheer awe. 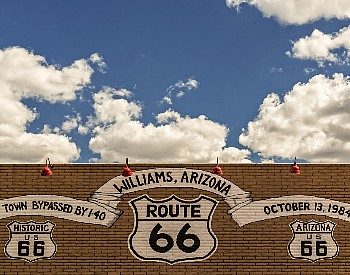 Route 66, also known as “The Mother Road,” is one of the original U.S. highways, established on November 11, 1926. The highway, which became one of the most famous roads in America, originally ran from Chicago, Illinois, through Missouri, Kansas, Oklahoma, Texas, New Mexico, Arizona, and California, before ending at Los Angeles, covering a total of 2,448 miles.

Williams Main Street is one the best preserved stretches of the Mother Road in America. Take a walk down Main Street and you’ll find vintage neon on buildings that are preserved to their original character, lots of fun shops with Route 66 merchandise, restaurants that have the character of the Route 66 heyday of the 50’s, coffee shops, internet cafes, and fine dining. This stretch through Williams was the last of the highway to get routed to I-40.

The Cataract Creek Gang, a band of cowboys and their saloon girl companions, wander the streets of downtown Williams during the summer months with gunfights breaking out nightly in the middle of Route 66 at 7:30pm. 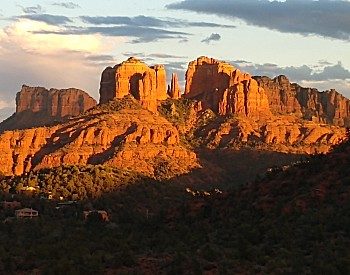 Sedona’s scenery will literally take your breath away. Gorgeous! Red rock stone formations extend upwards from the desert floor creating an ever-changing feast for the eyes. Sedona is surrounded by 1.8 million acres of national forest land and is just one hour away from Sheridan House Inn. It’s worth an extra day in northern Arizona to take it all in. Trails for hiking and biking and Jeep tracks wind their way around the spectacular landscape. And don’t forget the art galleries, the shopping and the incredible restaurants. We’ve got a packet for you with maps and highlights for a day in Sedona.

Want to take a tour of the area? Let us schedule a Pink Jeep Tour, one of the best ways to take it all in. Ask us for details.

what our guests are saying...

“We were unsure of what to do in the Grand Canyon, but you guys are experts and the sunset was absolutely perfect. We were not stressed about anything because you helped us plan our day. It was amazing.”